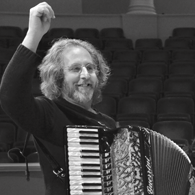 is co-founder and chair of othermusic e.V. and creator and artistic director of Yiddish Summer Weimar and Winter Edition. He is a composer/arranger, pianist, accordionist, educator, cultural activist and philosopher.
He is co-founder and director of "Brave Old World," founder and director of "The Other Europeans" and "Diaspora Redux," and he also performs with Bern, Brody & Rodach and with Guy Klucevsek.
His education included classical piano with Paul Badura-Skoda and Leonard Shure, jazz with Karl Berger, the Art Ensemble of Chicago, Anthony Braxton and others, contemporary music with John Cage, Frederic Rzewski, Joel Hoffman and others, and philosophy and cognitive science with Dan Dennett. He received his master's degree in philosophy and his doctorate in music composition.
In 2009, he was given the Ruth Lifetime Achievement Award for his work as a musician and educator and achievement with "Brave Old World".
>> www.alanbern.net 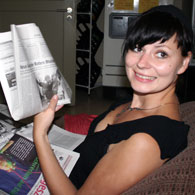 has been part of the Yiddish Summer Weimar management team since 2004, and part of the Winter Edition management team since 2008. She has been an associate for press and public relations in the Department of Planning and Communication at the Erfurt Technical University, and has studied journalism at the German Journalism School (Berlin) since 2007. Between 2004-2006 she worked in the Kulturbüro LaRete (Ettersburg). Before that, she studied art history and sociology from 1996-2004 at the University of Jena. Her master's thesis was titled "Vogue 1950-70. The Staging of Femininity. A visual history of the development of fashion photography."
She is responsible for public relations and project management.

In summer 2014, Katrin is going to leave Yiddish Summer for a while to be on parental leave with her second child. 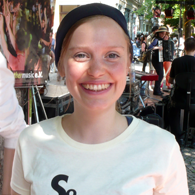 grew up and went to school in the beautiful region of Hesse. After spending some time in New Zealand, she started studying applied cultural studies at the University of Lüneburg. In 2009 she visited Weimar for the first time, taking care of a group of international young people during a work camp at Yiddish Summer. Having once experienced the extraordinary atmosphere of Yiddish Summer, Judith returned in the following years to support the management team during the summer.

At the beginning of 2013 she completed her master's degree (MA) and returned to Weimar, after having spent three months in Italy doing volunteer work.

Following a one-year traineeship program at othermusic e.V., Judith has taken over the project management of Yiddish Summer 2014, filling in for Katrin Füllsack during her parental leave. 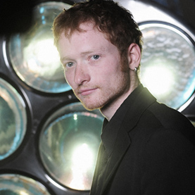 Johannes Paul Gräßer joined the othermusic e.V. team as an associate in December 2009.
His musical focus has been klezmer and East European music since 1999. He is a member and initiator of several ensembles performing folk music, classical music and experimental music. In addition to various solo projects, he also plays violin with the Modern Klezmer Quartet and was a founding member of The Painted Bird.
He is also the organizer and creator of cultural projects. The core value of his work is "to reflect on what is essential and fundamental with a basic honesty that allows the audience to find itself."
>> www.jpg-online.de 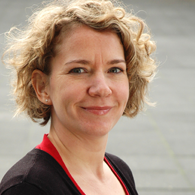 I am an art historian and arts administrator. After completing my Master's degree in Art History, Psychology and History at the Friedrich-Schiller-University in Jena, Germany in 2001, I began work as an arts administrator for Kulturbüro LaRete, Weimar, organizing European exhibitions (überMENSCHEN, EUROPA VIDEO ARTE, Coniugazioni) and festivals (Notti Italiane, Klezmer Wochen Weimar, Yiddish Summer Weimar).
I‘m also responsible for concept development, fundraising, public relations and management for several non-profit organizations (othermusic e.V., DIGIT Deutsch-Italienische Gesellschaft in Thüringen e.V., VDIG Vereinigung Deutsch-Italienischer Kultur-Gesellschaften e.V., VDKC Verband Deutscher Konzertchöre e.V., Kuratorium Schloss Ettersburg e.V.). From 2007 to 2010 I was coordinator of the 90th anniversary of the Bauhaus (Bauhausjahr 2009) in the "ImPuls-Region Weimar - Jena - Erfurt".  Since 2002 I have been connected with and dedicated to Yiddish Summer Weimar (at that time „Klezmer Wochen Weimar”) and I am a founding member of othermusic e.V. and from 2005 – 2013 member of the board.

From July 2015 I work on a very special "project" - devoting my time to my second baby son. 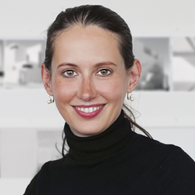 The journalist and cultural scientist Barbara Hallmann writes for the national and international press. She reported enthusiastically about Yiddish Summer Weimar back in 2006, and we are welcoming her back to this position in 2015. 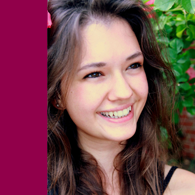 I was born near Kiel, right on the Baltic Sea. After finishing my schooling I decided to spend a gap year doing voluntary work at other music in Weimar. I am very interested in music have been playing the piano for a number of years.

I will use the year to think about the direction I want to take in my future career. It will  help me broaden my horizons and to discover new fields of interest. Spending a whole year immersed in the real world of work and giving my full support to the organization is  exciting. I am very happy to be hear, and I'm looking forward to Yiddish Summer in Weimar! 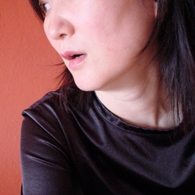 studied Visual Communication and worked in a Tokyo design agency before coming to Berlin, where she studied at the Hochschule der Künste (today the Universität der Künste). After obtaining her degree in 1993, she worked as an artist on sound and site installations and also as a freelance graphic designer.
Since 2010, she has been responsible for the visual image of Yiddish Summer, Other Music Academy and othermusic e.V., including internet presence, posters, t-shirts and more.  She has long been interested in Yiddish dance and has given workshops on the subject in Japan at "Osaka University" and "Japanese‐Jewish Friendship and Study Society in Kobe."
Since 2006, she's been a member of the Berlin-based dance ensemble "TarantaScalza" (Tarantella – traditional Southern Italian dance) with whom she has performed at many festivals.
>> www.talkingsine.de
>> www.tarantella-scalza.de