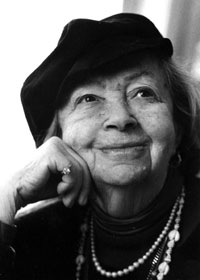 Beyle Schaechter-Gottesman was invited by Alan Bern to teach Yiddish Song at Yiddish Summer Weimar (then known as “Klezmer Weeks”) in 2004. The impression that her personality and songs left on the participants can be seen clearly in the subsequent performances and recordings of her work. Today, a decade later, her songs are known all over the world.

Lesser known is her poetry – which until now has been published almost exclusively in Yiddish – and her “first love”, visual art.
Schaechter-Gottesman was awarded the “National Endowment for the Arts Fellowship” in 2005 – the highest ranking recognition in the field of the traditional arts.