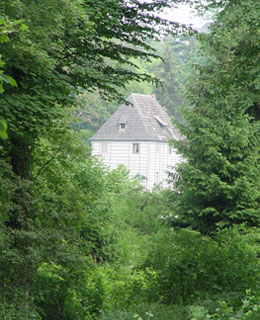 The term Weimar Classicism stands for a worldview and understanding of art at the end of the 19th century that put aesthetic education and a humane environment at the centre of human existence.
A golden age? The walking tour takes in places and places of work of individuals who left their mark on the age.

The tour is in English.
Cost: €12/€10 (concessions), payable on the spot
Duration: Approx 2 hours

In cooperation with Lernort/StattReisen Weimar e.V.

Wednesday August 6, 9:20 – 12 a.m.
Meeting point: 9:20 a.m. in front of the bakery in Weimar station
we will take the train to Erfurt, other music e.V. will accompany you to the meeting point in Erfurt

In the past 20 years Erfurt has brought back to light spectacular testimonies of Jewish communities in the Middle Ages and the 19th century. The discovery of the 13th century synagogue, the even older ritual bath of the medieval town, and the re-discovery of the unused classicist synagogue are some of the significant testimonies of Jewish communities in the city center. The tour "Kaschern and kosher" leads you into the world and working world of Jews and Christians in the vicinity of the Merchants' Bridge, opens the medieval mikveh and looks into ritual and religious characteristics.

The tour is in English.
Cost: €12/€10 (concessions) Transportation costs are not included in the costs
Duration: about 2 hours 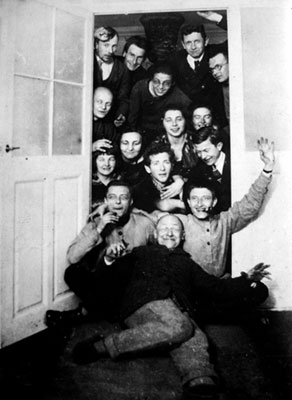 The modernist art movement of the twentieth century is inextricably linked with Weimar. Henry van de Velde, Harry Graf Kessler and the Bauhaus turned the city into a centre of the avant-garde, an artistic movement that went well beyond the boundaries of the city. The walking tour takes you to the erstwhile places of activity and gives you an puts the lives, art and architecture into a historical context.

If you are together with other music. e.V.:
9.45 outside the bakery in the main station (Bus number 6 direction Buchenwald)
Please pay your own fare on the bus.

In July 1937 the SS ordered the woodland on the Ettersberg (a hill on the outskirts of Weimar) to be cleared and built a new concentration camp there. The purpose of the camp was to fight political opponents, persecute Jews, Sinti and Roma, and to permanently exclude from German society those who were “incorrigibly deviant” (“Gemeinschaftsfremde”) – a group which included homosexuals, homeless people, Jehovah’s Witnesses and individuals with a criminal record. Along with Dachau, Auschwitz, Majdanek and Bergen-Belsen, Buchenwald soon became synonymous with the Nazi concentration camp.

Once the Second World War began, people from all over Europe were deported to Buchenwald. Over 250,000 men, women and children were imprisoned on the Ettersberg hill or in one of its 136 satellite camps. Here, the SS used them as forced labor for the German armaments industry.

At the end of the war Buchenwald was the biggest concentration camp in the German Reich. Over 56,000 people were tortured to death, or died as the result of medical experiments or emaciation. More than 8,000 Soviet prisoners of war were shot in a purpose-built extermination facility.

Resistance fighters in the camp formed an underground organization, doing what they could to curb the ravages of the SS. Nevertheless, thousands of prisoners died from fatigue shortly before the liberation.

The excursion begins with an introductory film (German with English subtitles), which will be shown at 10:30 a.m. The film is followed by a guided tour through the camp, with special emphasis on the relationship between the Buchenwald concentration camp and the city of Weimar.

The tour language is English
Costs: We ask for a donation

Practical information:
Clothing
The memorial is at the top of the Ettersberg hill at a height of 480 meters. Even on sunny days it is often cold and windy. We recommend warm clothing and sturdy shoes.

Children
In our opinion, it is not advisable to visit the museum, the crematorium and the detention cells with children under 12 years of age.

At the end of the 18th century, a small principality rose up to become a cultural metropolis. The image of the city is still marked by classicism. But Weimar is also synonymous with the Bauhaus and the Republic of Weimar, with the Gauforum (a dominating example of NS architecture) and with Buchenwald concentration camp. It is a city characterized by continuity and contradiction, and for many, it represents the “heart of German culture”.

The tour is in English
Costs: €12/€10 (concessions) payable on the day
Duration: approximately 2 hours

In cooperation with Lernort/StattReisen Weimar e.V.