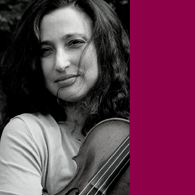 is an internationally acclaimed klezmer violinist and educator who has been active in the klezmer and Yiddish music scene for more than 25 years. She is a member of the Strauss/Warschauer Duo and was a long-time member of the Klezmer Conservatory Band, one of the premiere groups of the klezmer revival. She has appeared on numerous recordings and was featured in the Emmy Award-winning film, Itzhak Perlman: In the Fiddler's House. Deborah has performed and taught at the Jewish Culture Festival in Krakow, Yiddish Summer Weimar, KlezKamp, KlezKanada, and the Jewish Music Institute/SOAS at the University of London. She is also an award-winning children’s educator and a highly regarded Yiddish dance leader.

Deborah studied violin at Rutgers University and ethnomusicology at the University of Chicago. She has a deep knowledge of Jewish culture that stems from her upbringing in a traditional Jewish home, and from an extensive formal education in Jewish studies, including Hebrew and Yiddish language.

Her recent music collaborations include Fidlroyz and Voices of Ashkenaz with the German klezmer group, Tickle in the Heart, The Kadya Project: Voices of the Yiddish Fiddle, and Figelin, three fiddles in a boundary-breaking collaboration of North German and Yiddish music.