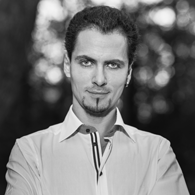 Mark Kovnatskiy is a widely travelled and highly acclaimed violinist, composer, and expert in Yiddish dances. He is also the musical director of the international "Yiddish Festival Moscow" (RU).

Mark has performed and taught at many music festivals around the world from North America to the former Soviet Union. In addition to his projects such as the "European World Music Ensemble", "Semer Label Project", “Joel Rubin Ensemble” (USA/GER/ITA/HUN)“Hamburg Klezmer Band”,"Queen Esther Klezmer Trio", "Fialke" and "Hamburg Klezmer Band", Mark has performed as a guest musician with “Socalled” (CAN) “Aaron Alexander's Midrash Mish Mosh" (USA), "Painted Bird" (Germany), and "Forshpil" (LAT), among others. He teaches Yiddish music and dance internationally.

In 2009 he worked as musical director of the Hamburg "KlezmerFest". His own klezmer compositions are played by many groups around the world.