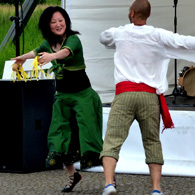 She has lived in Berlin since 1987. She is a freelance graphic designer. Following her studies at the Hochschule der Kunste Berlin (today UdK) she worked as a freelance artist in diverse performances, sound and site installations.

She first learned Yiddish dance in 1989 with Michael Alpert and Brave Old World. She has also studied with Zev Feldman, Sue Foy, Erik Bendix, Steven Weintraub and Andreas Schmitges, among others. She has led workshops in Yiddish dance in Japan at Osaka University and fort the Japanese-Jewish Friendship and Study Society in Kobe.

In addition to Yiddish dance, she also performs traditional Southern Italian dance, tarantella. Since 2006, she has been a member of the Berlin-based dance ensemble "TarantaScalza," directed by Margherita D’Amelio, with whom she frequently performs at festivals.