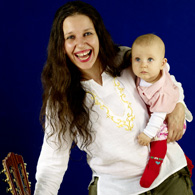 was born into a family of classical musicians in Taganrog (South Russia) and grew up in Kiev (Ukraine). She started playing guitar when she was 7. At the age of 13 she was cast for the Jewish children music theatre “Pintele” and went on three European tours with the theatre. When she was 17, she moved with her family to Hamburg. She learned singing at the Hamburg School of Music and took private lessons from the American singer Joanne Bell. She has sung in a number of bands, singing various styles such as pop, jazz, klezmer and Brazilian music.

As a songwriter, Kateryna has released a solo album as well as EPs and singles. She has also appeared as a singer, guitar player and percussionist in many other productions.

She has been active as a music teacher for the past seven years, teaching singing, guitar and song writing, and she is part of the German Government’s Melting Pop project for young people aged 14 – 18. She is also the proud mother of two wonderful daughters, Lea (19) and Tainá (4).