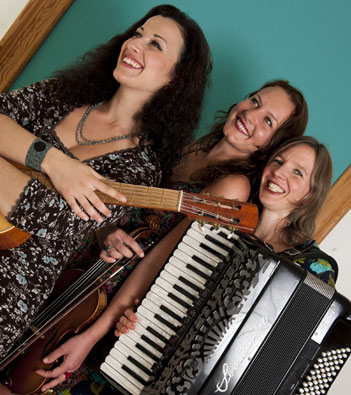 The sound of women singing had the honor of being banned in ancient Jewry because of its powers of seduction. Luckily, women today can develop their voices to their full potential, and it is fitting that three prominent female representatives of the international Klezmer scene have chosen to sing their ecstatic songs under the name of the ancient ban.

The three don’t only go well beyond the boundaries of the old interdict; with lightness and chutzpah they break conventional musical borders. Bygone voices of Jewish women composers and poets are juxtaposed with original compositions and new arrangements to give a playful, sensual and sassy narrative of the eternal circle of life.

It goes without saying that national borders are also irrelevant. The three artists bring with them a blend of Australian, German, Israeli, Dutch and Ukrainian influences. Classical sounds shine out alongside powerful folk music. An eclectic mix of songs keep company with ballads and vibrant dance music, before suddenly yielding to moving a-cappella songs.