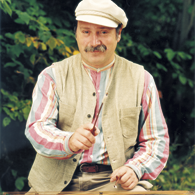 is a leading researcher in both Ottoman Turkish and Jewish music. During the 1970s he spearheaded the revival of klezmer music, studying both music and dance with the legendary Dave Tarras (1897-1989).

Having grown up in New York in a family from Northern Moldova, he was exposed at an early age to traditional Jewish dance.

In the early 1970s he did dance research in Turkey and taught Turkish dance, before focusing on Jewish dance in the 1990s.
His recent research involves the role of gesture in the arts, which he teaches in New York University, Abu Dhabi.

He is completing his book Klezmer: Music, History and Memory (Oxford University Press), and is researching a new book on the transnational klezmer tradition of Moldova.