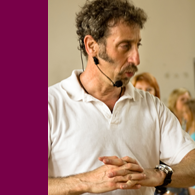 one of the world's most respected and popular teachers of Yiddish dance, received his initial dance training in Manhattan with Alvin Ailey and Erick Hawkins, among others.

He is in international demand as a teacher of traditional Yiddish dance at festivals and workshops around the world, including Klezkamp, Klezkanada, and festivals in Krakow, Furth, Paris, London, and Weimar, to name a few.

Much of his career has been creating and performing Jewish dance; he has worked with choreographers Felix Fibich and Shulamite Kivel, and has performed the work of Fred Berk. He was a principal dancer and choreographer with the Israeli folkdance group Parparim, was assistant director of the annual Israeli Folk Dance Festival in NYC, performed as half of the duo dance company Paller Rubenstein and Weintraub, and has choreographed a number of musicals in New York, Atlanta and Chicago.

Steven now lives in Philadelphia, Pennsylvania and is in the process of developing a dance company to perform to new klezmer music.